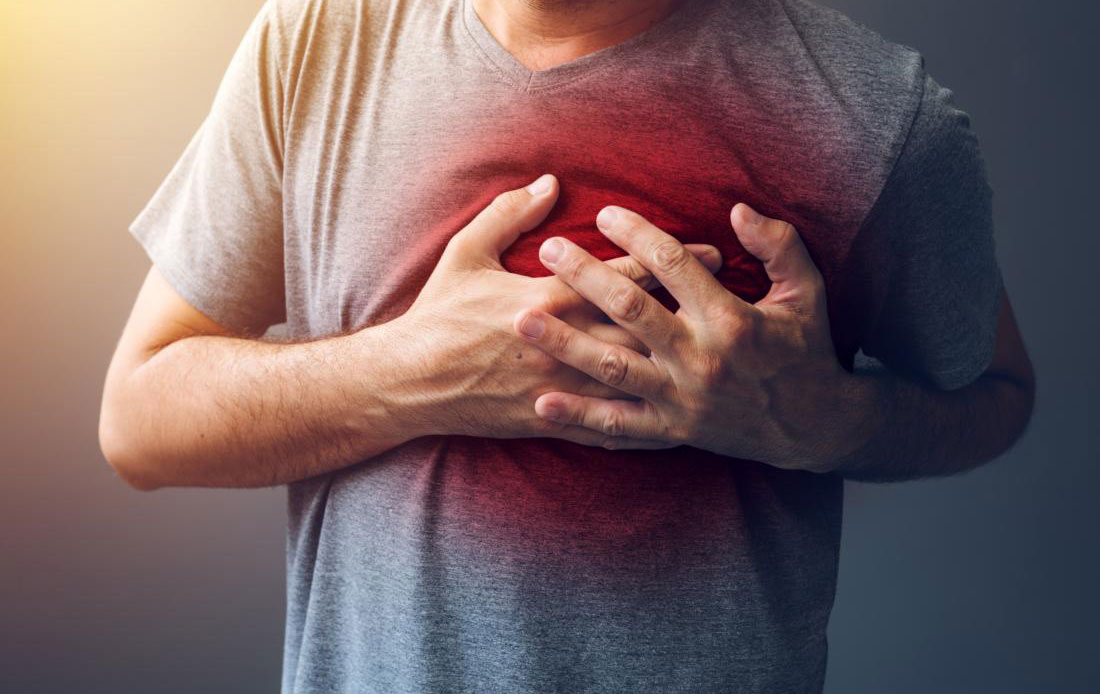 The heart needs a continuous supply of oxygen-rich blood from the coronary arteries to function properly. A heart attack occurs when a coronary artery is blocked, depriving part of the heart muscle of blood. The resulting damage to the heart muscle is the most common cause of death in people who have heart disease.

A blocked coronary artery usually results from long-term atherosclerosis, a condition in which arteries are narrowed by hardened fatty deposits called plaque. Most heart attacks occur when a plaque ruptures and a blood clot forms on the rough surface of the ruptured plaque and blocks blood flow through the artery suddenly and completely. In rare cases, a heart attack can result when a blood clot from another area of the heart breaks loose and blocks a coronary artery. Another rare cause of a heart attack is a spasm in a coronary artery that stops blood flow to the heart muscle. Using a stimulant drug such as cocaine can trigger this type of spasm.

In some cases, after a heart attack, a blood clot may form inside one of the four chambers of the heart. If the clot breaks loose, it can travel through the bloodstream and cause damage to tissues elsewhere in the body. For example, if the clot blocks an artery that supplies blood to the brain, the result is a stroke. Sometimes damage caused by a heart attack weakens and stretches one of the walls of the heart chambers, causing a bulge in the wall called an aneurysm. An aneurysm can grow and burst without warning, causing uncontrolled bleeding (hemorrhage). Inactivity during bed rest may cause blood clots to form in the veins of the legs (deep vein thrombosis). These clots can break off, travel through the bloodstream, and block an artery that supplies blood to the lungs (pulmonary embolism).

The following risk factors increase your chances of having a heart attack. While some of these can’t be changed—such as family health history, race, and gender—others can be modified or eliminated through lifestyle changes.

Symptoms of a heart attack vary in type and intensity from one person to another and from one heart attack to another in the same person. Some people may have a heart attack and have no symptoms. However, in most cases, the main symptom of a heart attack is sudden pain in the center of the chest. Some people describe the pain as a feeling of tightness, pressure, or fullness, or a squeezing sensation. The pain is usually severe and may spread to the back, left arm, neck, jaw, upper abdomen, and sometimes to the right arm. The pain may be continuous or may last for a few minutes, fade, and then return.

Most people who have a heart attack have recurring chest pain, shortness of breath, and fatigue for a few days before the attack. In some people, arrhythmia (irregular heartbeat) may also precede a heart attack. Unlike angina, the pain of a heart attack is not relieved with rest or after taking nitroglycerin (a medication prescribed to relieve angina). Also, heart attack pain is usually more severe and longer-lasting than angina.

Other common symptoms of a heart attack include dizziness, shortness of breath, sweating, chills, nausea, restlessness or anxiety, fainting, or weakness. Sometimes the lips, hands, or feet turn slightly blue. Women are more likely than men to have these symptoms in addition to chest pain. In rare cases, a heart attack does not cause symptoms and is detected by chance on an electrocardiogram (ECG), a recording of the electrical activity of the heart, performed for another purpose.

Some people may ignore their symptoms or assume they are caused by some other condition, such as indigestion or overexertion. However, because most deaths from a heart attack occur within an hour of the onset of symptoms, it is crucial to be able to recognize the symptoms and act quickly. The sooner treatment begins, the less damage to the heart muscle and the better the long-term prognosis.

The sooner treatment for a heart attack begins, the better your chances of survival. Treatment may include medication, surgery, or both, depending on your overall health and the amount of damage to the heart muscle.

You may be given nitroglycerin to improve blood flow to and from your heart and to relieve pain. If your pain is severe, you may be given a strong pain reliever such as morphine. You will probably be given antiplatelet drugs (such as aspirin) or anticoagulant drugs (such as heparin) to help prevent blood clots from forming again in the coronary arteries or new clots from forming in the veins, especially in the legs. Beta blockers may be given to help reduce the heart’s workload by slowing the heartbeat and lowering blood pressure.

You may be given thrombolytic (clot-dissolving) drugs to dissolve the blood clot that is blocking the coronary artery. However, this treatment is effective only if no more than 6 hours have passed since the onset of symptoms. In most cases, thrombolytic drugs are given (usually by injection directly into a vein) as soon as the diagnosis of a heart attack is confirmed.

You will have additional tests, such as a coronary angiogram, to determine whether the clot has dissolved and blood flow has been restored. If the tests show that the coronary artery is still blocked, a procedure such as angioplasty may be performed to reopen the artery. If the artery becomes blocked again after surgery, the procedure may be repeated a few days later.

As an alternative to treatment with a thrombolytic drug, your doctor may perform immediate angioplasty of the blocked blood vessel using specially designed instruments to remove the blood clot from the artery. Balloons and stents may be used to open the artery. In many cases, immediate angioplasty for a heart attack can be as effective as treatment with thrombolytic drugs in limiting the damage caused by a heart attack and improving a person’s chances of survival. In rare cases a doctor may perform emergency coronary artery bypass surgery at the time of a heart attack.