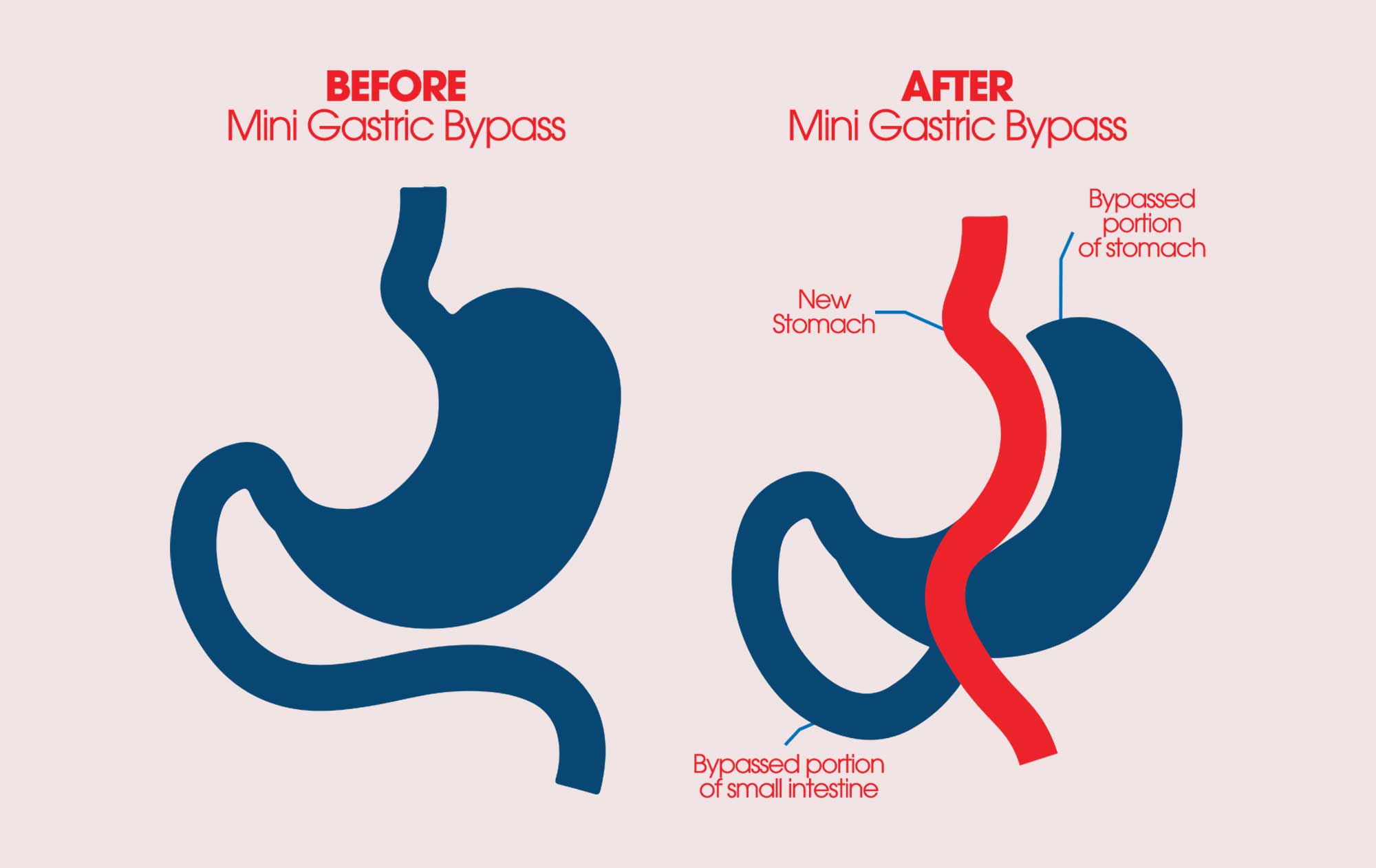 The One Anastomosis Gastric Bypass (OAGB), also known as “Mini-Gastric Bypass” was first reported in 2001. The OAGB is a minimally invasive procedure performed with laparoscopic technique. During an OAGB procedure, the surgeon first reduces the size of the “working” stomach by separating a tube-like pouch of stomach from the rest of the stomach. This tubular gastric pouch is then connected (anastomosed) to the intestine, bypassing up to 200cm of the upper part of the intestine. This technique differs from the traditional Roux-en-Y Bypass (RYGB) which requires two connections (anastomoses).

An OAGB typically results in 30% to 40 % body weight loss from baseline (60-80% excess weight loss). The most rapid weight loss occurs in the first 6 months after surgery and then continues at a slower pace for up to another 18 months. This weight loss is achieved through both restriction (the new gastric pouch can hold only a small quantity of food) and malabsorption. Bypassing a sizable segment of the intestine, the remaining intestine is not long enough for normal nutrient absorption leading to malabsorption. The substantial weight loss may lead dramatic improvement, and even complete remission of many of the obesity-related co-morbidities. Long-term data shows that the OAGB may result in a slightly higher weight loss and better resolution of diabetes than the RYGB. The superior diabetes remission rate in OAGB might be attributed to both the greater weight loss and the longer by-passed limb.

The advantage of the OAGB is its relative simplicity, compared to the RY gastric bypass. The single anastomosis results in a shorter operating time and less operative complications. Long term, the OAGB, results in fewer intestinal obstruction problems and less risk for internal herniation. As stated above, over the long-term, an OAGB usually brings about better weight loss and a higher diabetes resolution rate than a RYGB.

Disadvantages of the OAGB include a greater likelihood that patients with OAGB will experience greater bile reflux than after a RY gastric bypass, which can adversely affect their quality of life. Another disadvantage of OAGB a greater likelihood to develop significant vitamin and micronutrient deficiencies over time. Patients receiving OAGB must take regular vitamin and mineral supplements as instructed, and undergo lifelong, yearly monitoring. Finally, with the OAGB procedure, it is more difficult than with the RYGB to access the excluded gastric remnant for surveillance. This limitation may be an issue in regions with a high incidence of gastric cancer.

The OAGB has few long-term complications. Less than 5% of the patients may require revision surgery, with half of the revisional surgeries due to severe malnutrition and the other half due to bile reflux, ulcer and/or weight regain.

Sleeve Gastrectomy surgery is a restrictive surgical procedure. It is restrictive in the sense that…

Gastric Bypass surgery is a restrictive/malabsorptive surgical procedure. It is restrictive in the sense that…