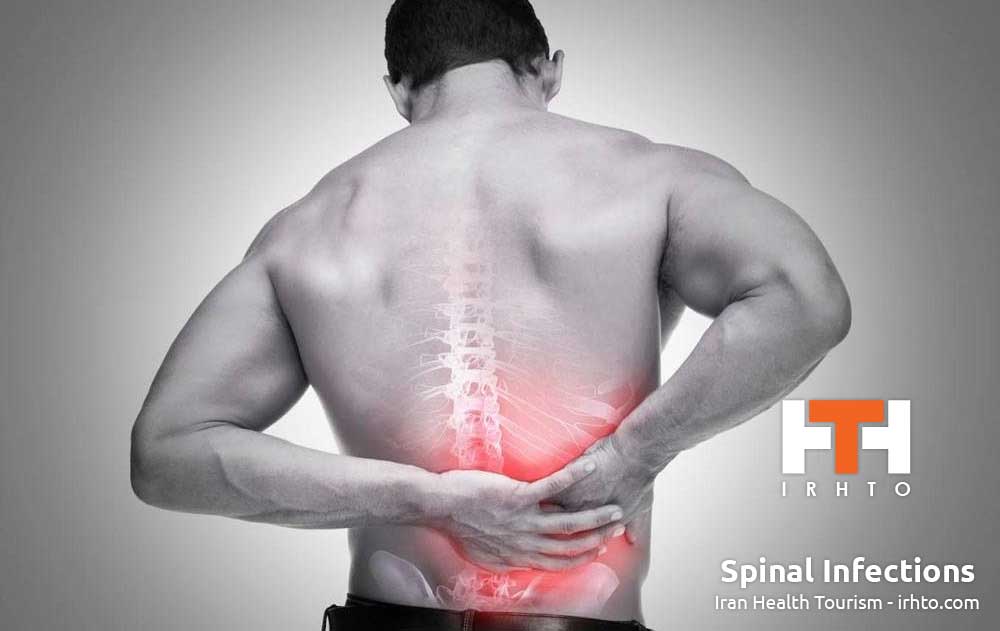 Spinal infections can be classified by the anatomical location involved: the vertebral column, intervertebral disc space, the spinal canal and adjacent soft tissues. Infection may be caused by bacteria or fungal organisms, and can occur after surgery. Most postoperative infections occur between three days and three months post-surgery.

Vertebral osteomyelitis is the most common form of vertebral infection. It can develop from direct open spinal trauma, infections in surrounding areas and from bacteria that spreads to a vertebra.

Spinal infections can be caused by either a bacterial or a fungal infection in another part of the body that has been carried into the spine through the bloodstream. The most common source of spinal infections is a bacterium called Staphylococcus aureus, followed by Escherichia coli.

Spinal infections may occur after a urological procedure because the veins in the lower spine come up through the pelvis. The most common area of the spine affected is the lumbar region. Intravenous drug abusers are more prone to infections affecting the cervical region.

Intervertebral disc space infections probably begin in one of the contiguous end plates, and the disc is infected secondarily. In children, there is some controversy as to the origin. Most cultures and biopsies in children are negative, leading experts to believe that childhood discitis may not be an infectious condition, but caused by partial dislocation of the epiphysis (the growth area near the end of a bone), as a result of a flexion injury.

Spinal infections often require long-term intravenous antibiotic or antifungal therapy and can equate to extended hospitalization time for the patient. Immobilization may be recommended when there is significant pain or the potential for spine instability. If the patient is neurologically and structurally stable, antibiotic treatment should be administered after the organism causing the infection is properly identified. Patients generally undergo antimicrobial therapy for a minimum of six to eight weeks. The type of medication is determined on a case-by-case basis depending on the patient’s specific circumstances, including his or her age.

Nonsurgical treatment should be considered first when patients have minimal or no neurological deficits and the morbidity and mortality rate of surgical intervention is high. However, surgery may be indicated when any of the following situations are present:

Once it is determined that the patient requires surgery, imaging tools such as plain X-rays, CT scans or MRI can help further pinpoint the level at which to perform surgery.

Current treatment protocols for spinal infections require treatment by a multidisciplinary team of physicians, including infectious disease experts, neuroradiologists, and spine surgeons. The team will be able to assess the best treatment approach on an individualized basis, whether it is surgical or nonsurgical.