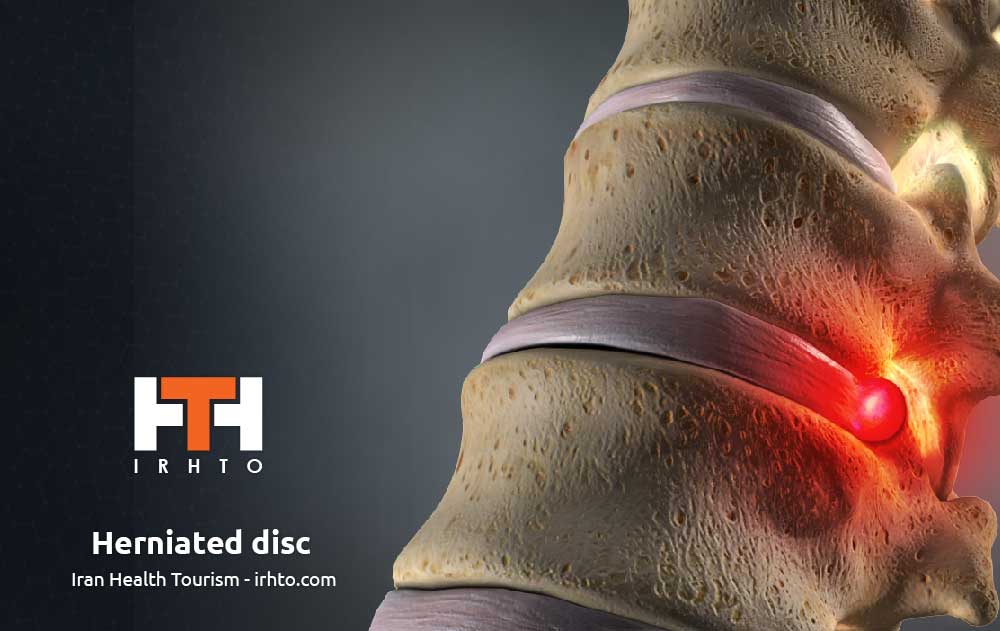 The bones (vertebrae) that form the spine in the back are cushioned by small discs. These discs are round and flat, with a tough, outer layer (annulus) that surrounds a jellylike material called the nucleus. Located between each of the vertebra in the spinal column, discs act as shock absorbers for the spinal bones.

A herniated disc (also called a bulged, slipped or ruptured) disc is a fragment of the disc nucleus that is pushed out of the annulus, into the spinal canal through a tear or rupture in the annulus. Discs that become herniated usually are in an early stage of degeneration. The spinal canal has limited space, which is inadequate for the spinal nerve and the displaced herniated disc fragment. Due to this displacement, the disc presses on spinal nerves, often producing pain, which may be severe.

A single excessive strain or injury may cause a herniated disc. However, disc material degenerates naturally as one ages, and the ligaments that hold it in place begin to weaken. As this degeneration progresses, a relatively minor strain or twisting movement can cause a disc to rupture.

Certain individuals may be more vulnerable to disc problems and, as a result, may suffer herniated discs in several places along the spine. Research has shown that a predisposition for herniated discs may exist in families, with several members affected.

Fortunately, the majority of herniated discs do not require surgery. However, a very small percentage of people with herniated, degenerated discs may experience symptomatic or severe and incapacitating low back pain, which significantly affects daily life.

The initial treatment for a herniated disc is usually conservative and nonsurgical. (A doctor may prescribe bed rest or advise the patient to maintain a low, painless activity level for a few days to several weeks. This helps the spinal nerve inflammation to decrease. Bedrest is not recommended)

A herniated disc frequently is treated with nonsteroidal anti-inflammatory medication if the pain is only mild to moderate. An epidural steroid injection may be performed utilizing a spinal needle under X-ray guidance to direct the medication to the exact level of the disc herniation.

The doctor may recommend physical therapy. The therapist will perform an in-depth evaluation, which, combined with the doctor’s diagnosis, will dictate a treatment specifically designed for patients with herniated discs. Therapy may include pelvic traction, gentle massage, ice and heat therapy, ultrasound, electrical muscle stimulation and stretching exercises. Pain medication and muscle relaxants also may be beneficial in conjunction with physical therapy.

A doctor may recommend surgery if conservative treatment options, such as physical therapy and medications, do not reduce or end the pain altogether. He or she will talk to the patient about the types of spinal surgery available and, depending on the specific case, will help to determine what procedure might be an appropriate treatment. As with any surgery, a patient’s age, overall health and other issues are taken into consideration when surgery is considered.

The benefits of surgery always should be weighed carefully against its risks. Although a large percentage of patients with herniated discs report significant pain relief after surgery, there is no guarantee that surgery will help every individual.

A patient may be considered a candidate for spinal surgery if:

Lumbar laminotomy is a procedure often utilized to relieve leg pain and sciatica caused by a herniated disc. It is performed through an incision down the center of the back over the area of the herniated disc. During this procedure, a portion of the lamina may be removed. Once the incision is made through the skin, the muscles are moved to the side so that the surgeon can see the back of the vertebrae. A small opening is made between the two vertebrae to gain access to the herniated disc. After the disc is removed through a discectomy, the spine may need to be stabilized. Spinal fusion often is performed in conjunction with a laminotomy. In more involved cases, a laminectomy may be performed.

In artificial disc surgery, an incision is made through the abdomen, and the affected disc is removed and replaced. Only a small percentage of patients are candidates for artificial disc surgery. The patient must have disc degeneration in only one disc, between L4 and L5, or L5 and S1 (the first sacral vertebra). The patient must have undergone at least six months of treatment, such as physical therapy, pain medication or wearing a back brace, without showing improvement. The patient must be in overall good health with no signs of infection, osteoporosis or arthritis. If there is degeneration affecting more than one disc or significant leg pain, the patient is not a candidate for this surgery.

The medical decision to perform the operation from the front of the neck (anterior) or the back of the neck (posterior) is influenced by the exact location of the herniated disc, as well as the experience and preference of the surgeon. A portion of the lamina may be removed through a laminotomy, followed by a discectomy. After the disc is removed, the spine often needs to be stabilized. This is accomplished using a cervical plate and screws (instrumentation), and, often, spinal fusion.

The doctor will give specific instructions post-surgery and usually prescribe pain medication. He or she will help determine when the patient can resume normal activities such as returning to work, driving and exercising. Some patients may benefit from supervised rehabilitation or physical therapy after surgery. Discomfort is expected during a gradually return to normal activity, but pain is a warning signal that the patient might need to slow down.